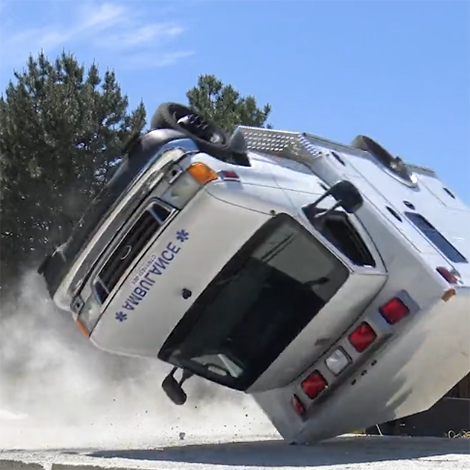 THE BEST AMBULANCE DESIGN STANDS UP TO RIGOROUS CAPE TEST

Committed to building “Vehicles for life,” the REV Ambulance Group recently performed a dynamic rollover crash simulation at the 49,000-sq.-ft. CAPE testing facility in Westfield, Ind., to test the structural integrity of REV’s standard ambulance module construction. A new modular body on a Type 3 Ford E-350 chassis was put to the (sled) test at the Center for Advanced Product Evaluation. The ambulance was engineered and built using the exact same methods as units built for REV customers.

The ambulance experienced 1 ½ revolutions with a test dummy stationed on a cot and another on a standard squad bench, more than 20 different internal and external cameras documented the rollover test as the ambulance was pulled back with steel cables more than 100 yards to launch the unit toward the impact zone at 25 mph. During the test, the ambulance hit a pair of 30-degree ramps that initiated the rollover, which impacted the driver-side front corner, front tire and running board, as well as passenger-side extrusion and skirt rail.

The ambulance survived this rollover with flying colors thanks to REV’s focus on deliberate engineering and manufacturing techniques that disperse energy during an impact. REV can point to a number of factors that led to the unit’s structural integrity. For instance: