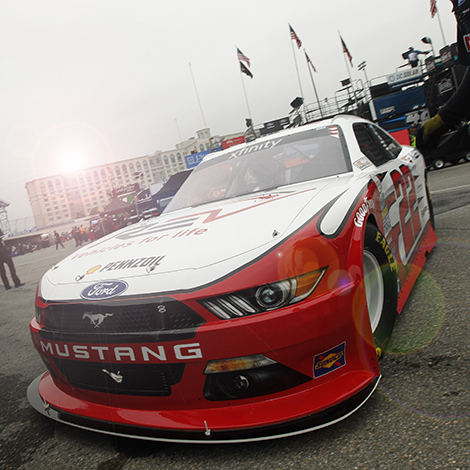 Team Penske driver Brad Keselowski is a lot of things. Likeable. Charismatic. Competitive. A real winner … and when he’s not winning, gracious tops the list.

When the 32-year-old driver placed second at the Pennsylvania 400 at Pocono Raceway on July 31, 2016 after a flurry of wins this year, he didn’t hang his head or steer clear of rookie winner Chris Buescher, who got a taste of Victory Lane for the first time. No, instead Keselowski thought of his first-ever win at Talladega Superspeedway in 2009, an upset like Buescher’s victory, and without a second thought, the second-place driver sought out Buescher to congratulate him. Keselowski went on to tell the media that he was glad to see the 23-year-old win.

Keselowski’s humble nature and ease with the media places him in a special category, which is why REV Group is excited to cheer on the Team Penske star on Aug. 6 at Watkins Glen International. Keselowski will drive the REV-sponsored No. 22 Ford Mustang during the NASCAR XFINITY Series’ Zippo 200 at the Glen. He joins NASCAR’s Joey Logano and three-time Indianapolis 500 champion Helio Castroneves as the elite few who can say they’ve taken the wheel for REV.

He grew up around racing, turning wrenches for the family-owned team, K. Automotive Sports. His dad, Bob, was a 1997 race winner in the Camping World Truck Series. His uncle, Ron Keselowski, raced at the Cup Series level in the 1970s. For years, Keselowski put his time in at the race shop, and by age 14, he was racing, too. Ever since then, Keselowski refuses to slow down.

Keselowski is having a stellar season with four victories and two runner-up finishes, and although he’s gracious when the trophy goes to someone else, the fire burns inside him when he’s racing. You can’t be as successful as Keselowski and not have a salty, competitive streak.

No pushover on the track, Keselowski has easily become one of the most popular drivers on the NASCAR circuit. Still, the Team Penske driver will tell you that being a fan favorite was never his intention, though he was the first driver to tweet inside his race car during a red flag in the 2012 Daytona 500. He gained more than 200,000 followers in seconds as a result of that one tweet. He currently has 678,000 Twitter followers and more than 165,000 likes on his Facebook page.

Clearly a banner season, REV Group is excited to know that his many fans might just get to see Keselowski and the REV logo in Victory Lane come Saturday.