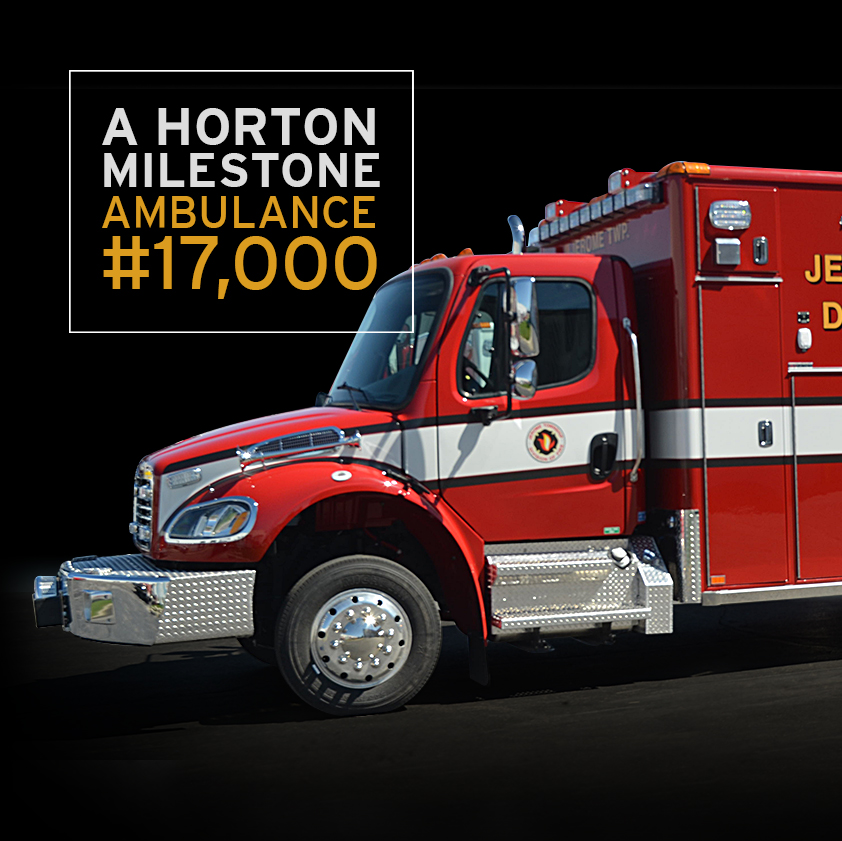 MILESTONE MARKS HORTON AS ONE OF THE TOP CUSTOM AMBULANCE MANUFACTURERS

On the windshield of Horton Emergency Vehicles’ latest ambulance, the number “17000” was scrawled on the left corner of the glass where the production number typically goes on a vehicle making its way down the Horton ambulance line. Horton celebrated this number at FDIC International 2016 among the world’s largest gathering of fire professionals. The milestone marks the ambulance manufacturer’s 17,000th vehicle to roll off the production line in the last 48 years.

By pure coincidence, Horton hit the 17,000th mark just before FDIC, similar to the 16,000th milestone the company reached in time for EMS Week 2014.

“We can’t plan orders. It’s just a happy coincidence, and actually, happenstance doesn’t usually happen among industry leaders, like Horton,” said Dave Marshall, Brand Manager. “We complete an average of two vehicles per working day, and when you look at our long history with townships, like Jerome, it’s easy to see how we deliver in the ambulance industry, time and time again. Not to mention, Horton has an international footprint that continues to grow.”

Jerome Township, founded in 1821 in Plain City, Ohio, has looked to Horton for more than 20 years for its vehicle needs. Meanwhile, Horton’s 16,000th unit was delivered to Delaware County EMS (DCEMS), a repeat customer of Horton’s, going on 40 years.

“Our customer relationships are essential to our success,” Marshall said. “Without this trust, we would have never bridged this number. Just think about it — 17,000 vehicles. It’s amazing to think we have that many ambulances helping save lives every day. That kind of trust is amazing.”

And at the same time, Horton has earned that loyalty as one of the top custom ambulance manufacturers. In fact, the company is known for its innovations, in part thanks to founder Carl Horton, who built the first-ever van ambulance, which pioneered the industry’s shift from hearse-based transport to today’s modern-age ambulance.

Carl Horton also used the recession to switch from the standard bay-build system to an assembly line process, cutting the industry-standard 60-day build in practically half the time. Today, the Horton brand continues to find efficiencies, relying on the latest technology to push the brand into the forefront.

“Two years down the road, I wouldn’t be surprised if we’ll be talking about Horton’s 18,000th unit,” Marshall said.