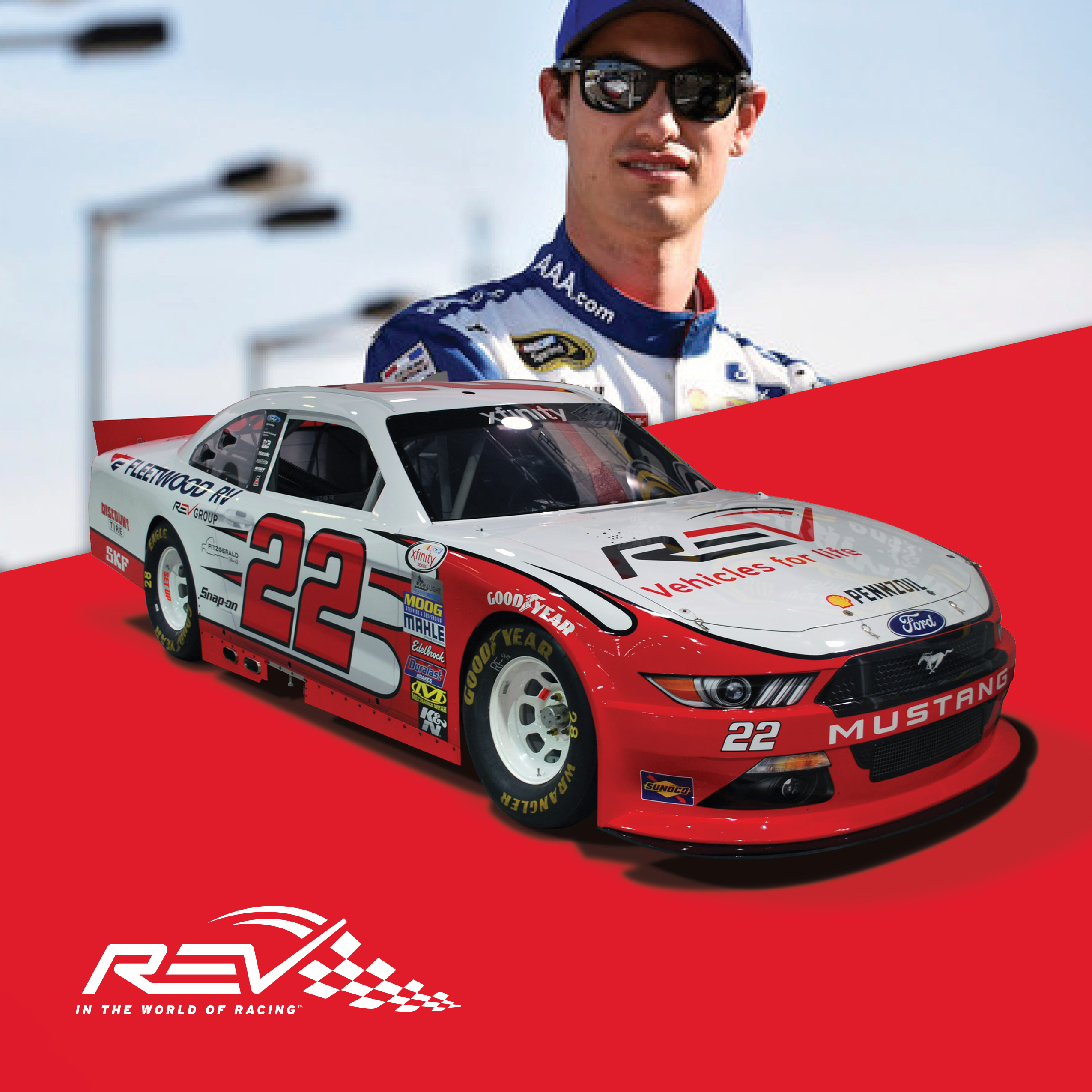 Little Joey Logano couldn’t believe his eyes. Staring him in the face was a Christmas present that would change the course of his life forever.

During a Joey Logano Foundation video shoot, Logano recalls that present — a go kart from Santa Claus. “I thought it was the coolest thing. All I wanted to do when I got home every day was to drive my go kart around the yard. I was totally psyched.”

His name in NASCAR is a big deal, and the REV logo, along with Fleetwood RV, one of REV’s iconic motor coach brands, will be front and center on the Joey Logano car — Team Penske’s No. 22 red and white Ford Mustang — during the Dover NASCAR race at 2 p.m. ET Saturday (May 14) at the Dover International Speedway.

Logano grew up in a family that had no background in racing, but yet it was something he was good at doing. He laughs remembering how it was the only thing he really excelled in as a child. Baseball was a bust. Hockey … he was halfway decent. But racing tugged at his heart strings. By age 7, he wanted to race cars for a living, and his father, Tom, fueled that hankering even more, buying him a Quarter Midget. Soon Tom was the crew chief, though he didn’t know anything about racing, and Joey was racing for trophies in Quarter Midgets, Bandoleros and Legends cars.

“The two of us kind of learned together as we moved up through the ranks,” Logano recalls in another video. “Those Quarter Midget days, when we first started, were fun.”

And looking back, Logano likes to reflect on how much they grew as a father-son duo. Twelve years later after his first Quarter Midget race, Logano netted three NASCAR accolades — he set the record as the youngest Spring Cup Series winner at 19, he also claimed a pole position that year and he won NASCAR’s Rookie of the Year during that 2009 season. The media called Logano “a breath of fresh air.”

LOOKING AHEAD TO THE DOVER NASCAR RACE

In 11 starts in 2016, Logano is currently ranked eighth in the 2016 Sprint Cup Standings and is determined to shine while representing REV in Dover.

“I’m just go, go, go, go all the time,” Logano says of racing. “It’s hard for me to slow down.” (That’s music to our ears as we join the list of Joey Logano sponsors.)

From the time his dad helped him during his Quarter Midget days to the pressure of the Sprint Cup Series, Logano understands he can’t do it all by himself.

“My goal in life is to be able to surround myself with people that are better than me,” Logano says. “This is a team sport.”

And as a team player, Logano knows he has to look out for others. Logano and his wife, Brittany, are passionate about helping people, and so they created the Joey Logano Foundation to inspire the NASCAR community to assist those in need following a natural or human disaster.

“I want to be remembered for more than just a championship race car driver,” Logano says. “I feel like God’s blessed me with an opportunity to change people’s lives. Being able to affect somebody’s life is pretty special.”

Logano says when he meets families who are struggling, it definitely puts things in perspective.

“Yes, we want to go out there and win as many races as possible, but there’s a new goal,” he says. “I realized that new goal is trying to affect other people’s lives.”

Racing has helped him do that. So here’s to seeing the REV logo in Victory Lane.