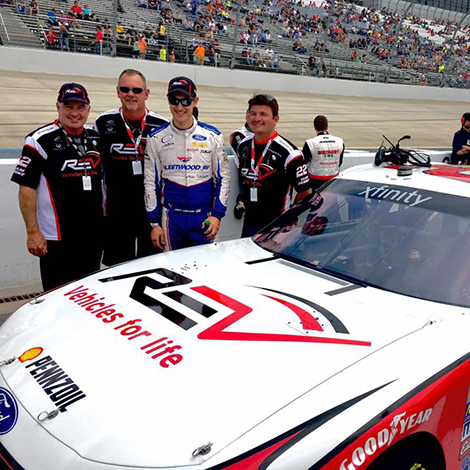 REV Group celebrated another weekend in the televised racing spotlight — this time with the REV logo being sported on Joey Logano’s car during Saturday’s NASCAR XFINITY race of the Ollie’s Bargain Outlet 200 at Dover International Speedway.

While Logano didn’t make it to the podium, there was still plenty for REV to celebrate. The weekend was filled with festivities as the company hosted a Friday night VIP dinner at the historic Air Mobility Command Museum, where guests met Logano, along with Team Penske drivers Ryan Blaney and Brad Keselowski. Saturday was marked with race-day tours and a meet-and-greet by Greg Erwin, the XFINITY Series Competition Director.

Then the racing thrills began. On Lap 81 of Saturday’s main race, it looked as though theREV logo might grace the podium as Logano crept into third place. The excitement thrummed among REV’s guests like a rumbling engine as they watched from the company’s infield VIP suite, overlooking the start-finish line of the “Monster Mile” — the world’s fastest 1-mile oval track. (Drivers turn laps at speeds up to 170 mph in less than 23 seconds.)

Logano ended up driving his way to a seventh-place finish after beginning the main event from the same position (based on his finishing spot in the first of two heat races to set the field). Logano worked his way to the fourth position by the end of the 40-lap preliminary event to earn the starting position. Logano kept the No. 22 Ford inside the Top 10 of the main, 120-lap event until the first caution on Lap 71. The Team Penske crew made air pressure adjustments on the four-tire stop, gaining two positions. Logano would drive the red and white No. 22 machine to the fifth position by Lap 81, where he would remain until the final caution of the event on Lap 109. The team remained on the track while other cars on the lead lap pitted, moving the No. 22 REV-sponsored Ford Mustang to the third position. On the ensuing restart, Logano found himself trapped in the low lane to cross the finish line in the seventh position. Dubbed the “Monster Mile,” Dover International Speedway is the world’s fastest 1-mile oval track with drivers turning laps at speeds up to 170 mph in less than 23 seconds.

The next REV-sponsored Team Penske car will take the track at Watkins Glen International for the Aug. 6 Zippo 200 at the Glen.