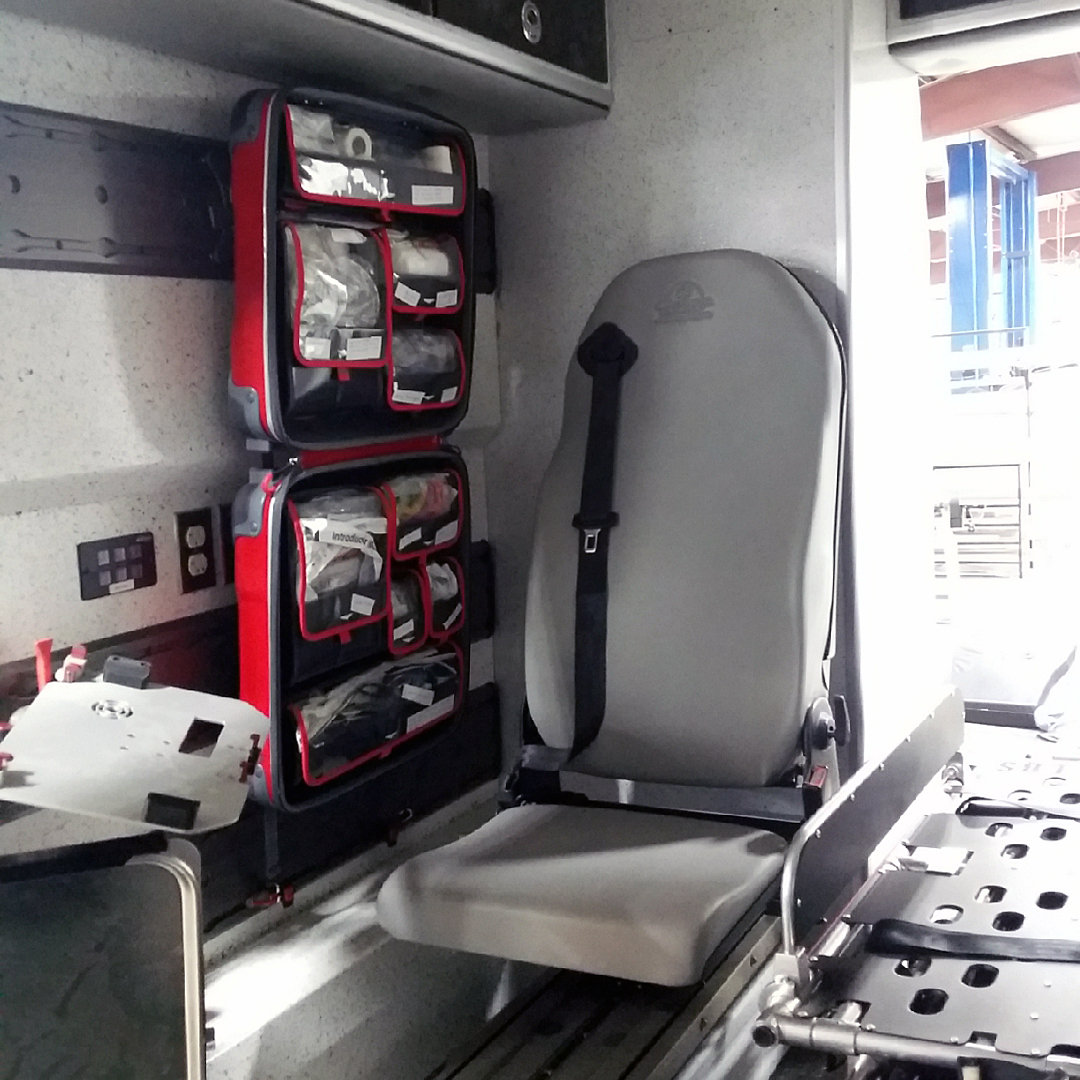 Pulaski Ambulance District has four ambulances in its fleet with the Ferno iNTRAXX modular system.

It was like most emergencies. High speed. A clover leaf merging. Only this time, the cars on the highway wouldn’t yield. In the back of the Type II ambulance, paramedic Mike McCart was unbuckled as he tried to reach supplies needed to tend to a patient. Before McCart could react, the driver gunned the vehicle, the ambulance jerked and McCart was sliding back. And then there was a sudden stop and McCart was sliding the other way — right toward the open shelving behind the passenger seat.

The impact fractured a handful of McCart’s ribs, sidelining the EMT for a month …

Eleven years later, McCart is the Pulaski Ambulance District Deputy Chief in Waynes, Mo., and he’s made it his mission to make sure his crew’s ambulances are designed in a way that keeps every necessity within safe reach.

With 25 years and a slew of current titles under his belt (Mercy Life Line flight paramedic, medical/rescue specialist for FEMA, USAR and the Missouri Task Force One and assistant commander for the St. Roberts City Police joint enforcement tactical team), McCart has seen how different crews work and affirms the industry standard ambulane interior is just that — standard. Comparing the designs of yesterday’s ambulance to today’s, McCart says ambulance interior design has been slow to improve. The bench seats, cot mounts and interior cabinets of a 1959 Cadillac ambulance look much the same in today’s unit, and decades of old ambulance snapshots further McCart’s stance.

But McCart is seeing a welcome change.

There’s one design, he says, that is changing the future of ambulances — the Ferno iNTRAXX interior modular system that utilizes a series of wall-mounted tracks, quick-release mounts and plug-and-play storage solutions. REV Group has partnered with Ferno to introduce the REV FLEX model, available on AEV, McCoy Miller, Leader and Wheeled Coach. An advocate of this modular system, McCart has added four modular interior units in four years, featuring three different designs his own team helped customized, and he’s excited REV Group is streamlining production of these units with REV FLEX as he adds two more trucks this year and plans grow his “smart” fleet eight in a few years.

“I’m really excited to work with REV on our next couple of trucks,” McCart said during a JEMS webinar of ambulance peers. The Journal of Emergency Medical Services invited McCart to be the guest speaker during one of its webinars to discuss the advantages of an interior modular system, like REV FLEX.

During the hour discussion, McCart pointed to numerous benefits that he has seen since deploying his own interior modular units. Not only are the units safer because equipment is secured during the wall, but the Pulaski Ambulance District’s insurance and Workman’s Comp claims have declined significantly. In the 2014 policy year, more than 15 claims were reported, compared to 2016, when less than five claims were logged. This year, the county has not accumulated any out-of-pocket deductible costs, and Pulaski’s insurance company has awarded the county with a number of rebate checks that McCart’s team has poured back into the ambulances for more modular equipment.

The monetary benefits don’t stop there. Without deep-recessed cabinets, McCart has found his crew has significantly decreased surplus inventory and has improved restocking times. In fact, during the webinar, McCart said his crew threw away $10,000 worth of expired inventory in preparation for a state re-licensure. Most of the expired supplies had been hoarded away in his oldest units’ recessed cabinets. But now thanks to the smaller pouches of the modular interiors, inventory is better managed and entire cabinets of supplies aren’t easily contaminated during messy emergencies.

The flexibility of a modular system has also allowed McCart to respond to the small percentage of calls most ambulances aren’t equipped to handle, like the on-board delivery of a newborn. Within minutes, equipment can be swapped out in the REV FLEX design to answer the call, or left-handed crews can move pouches and equipment to better suit their needs. With REV FLEX, there’s endless configurations. And at the end of the day, the unit can be stripped down and hosed out for the deepest of cleans, McCart said.

“As a customer, ambulance crews should be able to sit down and have a conversation with their manufacturer. These conversations are important, and we should be able to have a modular system,” McCart urged. “If we keep asking for these things, a lot of stuff that is custom will become the standard.” And there’s no doubt, McCart added, after decades of the same interior standards, the industry is due for a revolution — one that has finally arrived.

SEE REV FLEX FOR YOURSELF

If you’re near Charleston, S.C., stop by the Twisted Cypress Brewing Company (and coffee haus) to see the touring REV FLEX ambulance, on display from 5-9 p.m. Friday, Aug. 11, 2017, at this popular locale, owned by one of our very own — a paramedic! Can’t swing by? Tune in tomorrow evening for a Facebook Live broadcast as REV Group demos the unit.