REV GEARS UP FOR OFFICIAL BRAND UNVEILING AT BUSCON 2016 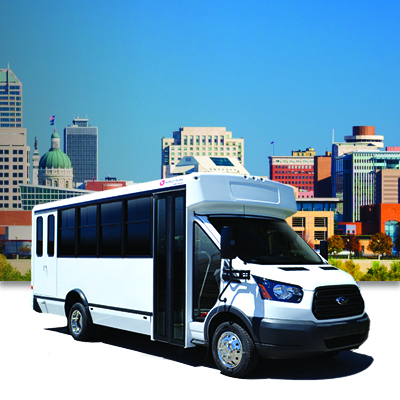 REV Group is gearing up for the official unveiling of the World Trans bus brand during BusCon 2016, slated for Sept. 19-21 in Indianapolis. World Trans answers demand in the transit segment and joins an impressive REV Bus Group portfolio of industry-leading products. REV rolled out the World Trans narrow-body T-Series in May of 2016 at the APTA Bus & Paratransit Conference in Charlotte, N.C., and during BusCon, the company will showcase the T-Series, as well as the all-new E-Series.

Engineered to be lighter, stronger and safer, World Trans gives customers a quieter and more fuel efficient transit bus in both wide- and narrow-body designs. Already, World Trans has begun producing the T Series, a narrow-body model built on a Ford Transit cutaway chassis, available with a gas or diesel engine. Interested dealers can schedule a demo of the T Series by completing the World Trans’ Request for Information form.

At BusCon, World Trans will unveil the E Series on the Ford E-350/450. Following the E Series rollout, the new REV brand will introduce the G Series on the Chevy G3500/4500 in October. The Ford Transit T Series will be manufactured in South Hutchinson, Kan., alongside Collins, a sister bus manufacturer. The E and G Series will be built in Salina, Kan., at ElDorado, another REV brand.

Based on decades of industry knowledge, World Trans has designed these products to answer almost any basic bus need that a customer might require:

• The T Series is available in a narrow-body design in 22- and 24-foot models with industry-leading capacity of up to 18 passengers. The World Trans T Series features the largest view-out windows and external storage in the industry, while its exclusive continuous one-piece tubular roof bow design provides unmatched safety. For added durability, the series features a galvanized steel structure for superior strength and rust prevention.

• The E and G Series will offer 22-, 24- and 26-foot floorplans. Seating capacity will range from 12 to 25 passengers. These two lineups feature unique modular construction, which allows for World Trans to offer a 60-day lead time, far surpassing the typical 90- and 120-day norm. Despite these impressive lead times, World Trans does not sacrifice durability. Like the T Series, both feature galvanized steel construction.

Interested dealers or customers can learn more about these products by completing the World Trans’ Request for Information form.