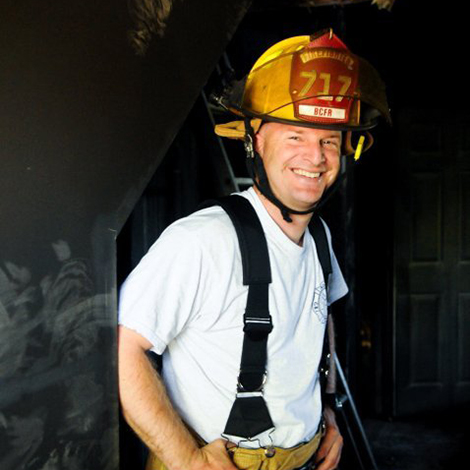 Ryan McDonel has always been in the line of fire. In fact, the word “fire” has seemingly made its way into most every job title he’s ever owned. At the same time, the word “hero” seems to follow McDonel everywhere he goes.

As part of a three-part installment, REV Group, Inc., would like to honor three very special veterans, starting with Capt. McDonel. At REV, we’re proud to serve some of the most honorable vehicles industries filled with honorable everyday heroes, like Ryan McDonel.

Ryan, an E-ONE fire truck dealer for FireLine, Inc., graduated from the United States Naval Academy in 2000 with a long list of honors that earned him a special invitation to the Georgia House of Representatives. After his graduation, he was commissioned as a second lieutenant in the U.S. Marine Corps and was sent to The Basic School in Quantico, Va., to learn how to lead fellow Marines. Ryan went on to become a first lieutenant and battery fire direction officer, serving two deployments in the western Pacific and one deployment in Iraq.

“After those deployments, I had a new appreciation for just how much we have here, especially when I saw such abject poverty,” Ryan says. “Seeing that changes your whole perspective on life.”

So does witnessing danger firsthand.

As a Battery Fire Direction Officer for Battery M of the Third Battalion, 11th Marine Regiment in Operation Iraqi Freedom, it was Ryan’s job to point “the big guns,” using a lot of physics and math to target the enemy. Usually, there was distance between the ground war and his team, but Ryan recalls a firefight when his battery was the only one capable of shooting. His battalion was forced to shoot in an unconventional way — closer than usual — providing a whole new perspective on war.

That same battalion was also credited for helping bring Iraq’s Republican Guard to its knees — a five-day firefight that ended in a volley of 155mm rounds just after daybreak. The last round shot was the 1,000th round of the ground war. Ryan and the other Marines also found time to offer more than just fire support that day, distributing six cases of humanitarian rations to a small village of Iraqi citizens.

STAYING IN THE LINE OF FIRE

After his service in the Marine Corps, Ryan returned to Georgia to follow in family footsteps, working at FireLine, Inc., the very company his grandfather, Bill, started in the mid-1960s. Eventually, Ryan’s father and two uncles took over the business, and now Ryan is a Fire Apparatus Sales Manager, notching nine years with the family-owned company.

FireLine prides itself on being an E-ONE sales and service center in Winder. In fact, the family claims the E-ONE name helped build the company. “We were actually an E-ONE dealer under a different name before FireLine,” Ryan explains.

His family chose to carry E-ONE products because of the company’s strong partnerships with dealers. However, after Ryan’s time in the Marine Corps, he now has a new appreciation for the REV brand. After receiving a degree in Ocean Engineering from the United State Naval Academy, Ryan became a stickler on quality.

“Having an engineering background, what really impresses me about E-ONE is the structural integrity of the products. E-ONE is beyond a shadow of a doubt the best-built truck. It’s top-of-the-line, which is important when it comes to saving lives.”

Speaking of heroics, Ryan misses the adrenaline rush of being a Marine, and so to stay in the line of fire, he volunteers his time as a firefighter. He has seen his share of car accidents, and gets his “adrenaline fix” by going into burning buildings.

“I think my time in the Marines taught me that there’s a bigger purpose than just one’s self,” Ryan says. “It’s about always taking care of the guy next to you. Every time, a firefighter goes into a burning building, his responsibility is to those lives on the inside. A lot of people don’t understand what a life-and-death situation is, and you never can really become accustomed to it, but when you’re exposed to it on a routine basis, it makes you appreciate life even more.”