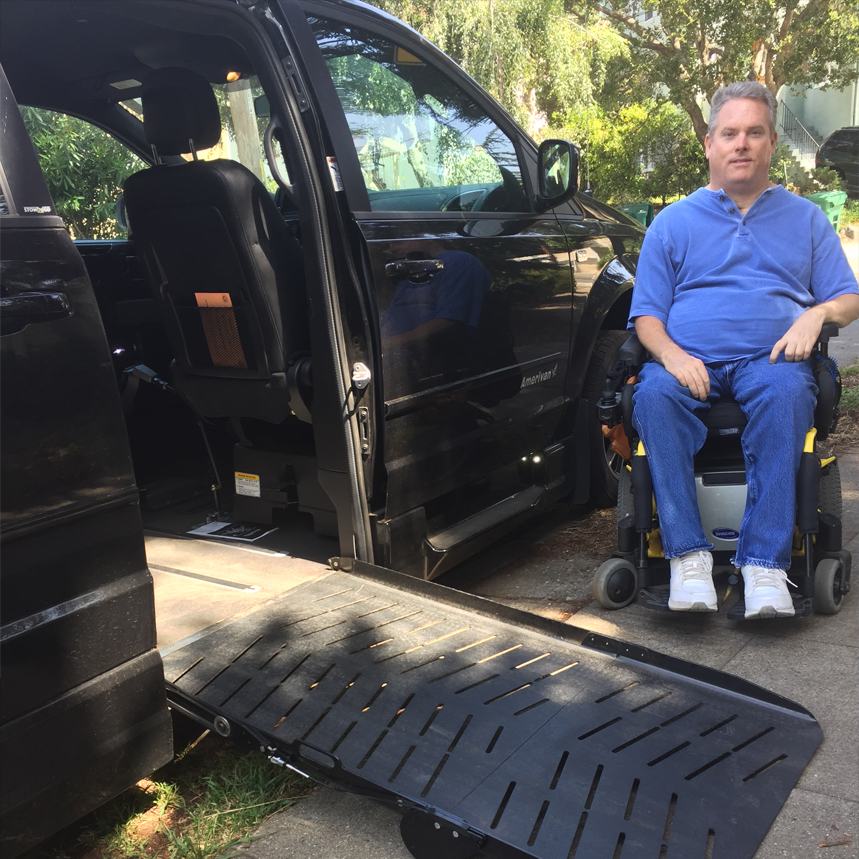 Ken Pollock never thinks about the what ifs in life. He could have — easily — but the West Point graduate refused to let a tragic car accident slow him down. This month, REV Group gives its veteran story nod to Pollock, an ElDorado Mobility customer who is still on the move even after his dreams came to a halt …

Pollock had big dreams back in 1988. Age 23, he had it all. His body was in tip-top shape. He mind (as always) was super sharp. And he was ready to conquer the world.

Pollock had graduated from the U.S. Military Academy in West Point, N.Y., with a bachelor’s degree in computer science. He had completed officer basic training at Fort Bliss, Texas, and was preparing to enter the next stage of his infant Army career, readying to shoot down the Scud missiles Saddam Hussein was launching into Israel.

Just five months after graduating from one of the country’s most prestigious military academies, Pollock’s dreams came to a sudden halt. While driving on Interstate 25 near Albuquerque, New Mexico, Pollock fell asleep at the wheel and crashed his car, sustaining spinal cord injuries that would force him to medically retire from the U.S. Army in 1990 as a quadriplegic.

“There’s no real hero story to my veteran story,” he says. “The lesson … don’t drive across the country overnight when you’re tired.”

Pollock admits it was difficult not to be able to do what he had trained himself so hard for.

“All I have to do is look at the graduates to see that there’s a cornucopia of things they have done,” Pollock says. “My possibilities were endless, but really, the what if game isn’t important to me.”

In fact, Pollock refused to let the spinal cord injury keep him down. Only five short years after the accident, he netted himself a new degree — an MBA in technology management from UC Davis.

“Once I figured out how to conquer daily living, it was time to go back to graduate school and move on.”

Now 51 years old and half his life “in the chair,” Pollock admits his Army experience pales in comparison to his mobility van credentials, but that doesn’t make him any less of an Everyday Hero now, especially to his fellow veterans.

Pollock, a California native who currently lives in Oakland, drives a 2014 30th Anniversary Dodge Grand Caravan with an ElDorado Mobility conversion. Even though it’s his first ElDorado purchase, Pollock is a big fan. He likes how it’s made. (ElDorado is the only lowered-floor minivan that builds on a standard stainless-steel floor.)

“I’ve been driving mobility vans for a long time, and I can’t be more pleased with ElDorado. I would go back and get another one,” says Pollock of the Amerivan.

ElDorado’s intuitive ramp was the deciding sale factor for Pollock.

“The ramp mostly folds in half, where some of the others are a one-third, two-third design. With ElDorado’s ramp, I’m able to deploy it over a high curb, and there are a lot of places out here in California where the curbs are fairly high.” It means Pollock can use his ramp in places where other mobility drivers can’t.

Pollock was also drawn to the fact that ElDorado products are made in American.

“If my Amerivan were a Chinese product,” Pollock says, “I would switch to an American-made van.” He takes pride in that sort of thing, especially because Pollock serves as the Vice President of the Bay Area and Western Chapter of the Paralyzed Veterans of America (BAWPVA) in Palo Alto. The chapter ensures veterans with spinal cord injuries receive veteran benefits, as well as holiday meals. BAWPVA also sponsors wheelchair sporting teams, like surfing, basketball, shooting, skiing and bocce ball.

And all the while, driving an ElDorado Amerivan makes Pollock’s life easier when commuting to Palo Alto.

“That’s about 50 miles from my home, so it allows me to independently go down to that office and participate with the Paralyzed Veterans of America,” Pollock says. “All I have to do is hop in my van and drive there. I don’t have to wait for someone to come and pick me up. Fifty miles on the road and back … that’s an example of my ability to drive as a quad without any trouble through horrific Bay Area traffic for 100 miles a day.”

Pollock says when he was first injured, he never thought he would drive again.

“Especially not complicated, freeway driving in a congested area. I can remember thinking that specifically,” Pollock says. “It turns out that with all of the technology available, like electronic hand controls, not only can I drive, but I can do it with confidence. I’m in the belly of the beast as far as man-made obstacles go. I’ve driven hundreds of thousands of miles.”

Never one to slow down, Pollock decided to modify a two-seat, ultra-light aircraft about 10 years ago, enabling him to take mobility to new heights.

“The wing of the plane is a parachute,” Pollock explains. “It has a big, 80 HP motor on the back. Once you fire up the motor, the parachute inflates. As soon as you’re going 28 mph down the runway, whoosh, you’re up in the air. I didn’t know of any quadriplegics that had ever done anything like that, so that was a fun challenge for me … modifying and doing something no one else had pulled off.”

Want to see Pollock in flight? Watch him power his parachute solo in this YouTube video, and then check out a second video where Pollock discusses his one-of-a-kind modification.

So where does Pollock get all of that drive from? Fellow veterans, he says — the ones who conquered similar fates.

“I saw plenty of my fellow veterans who were hurt before me carrying on in their everyday life,” Pollock admits. “It’s a supportive community … our guys looking out for each other. It wasn’t just me and my strength, but all of the other veterans who led a path similar to mine that continue to inspire me.”

It’s that support, he says, with a few modifications in life, that keep Pollock moving.