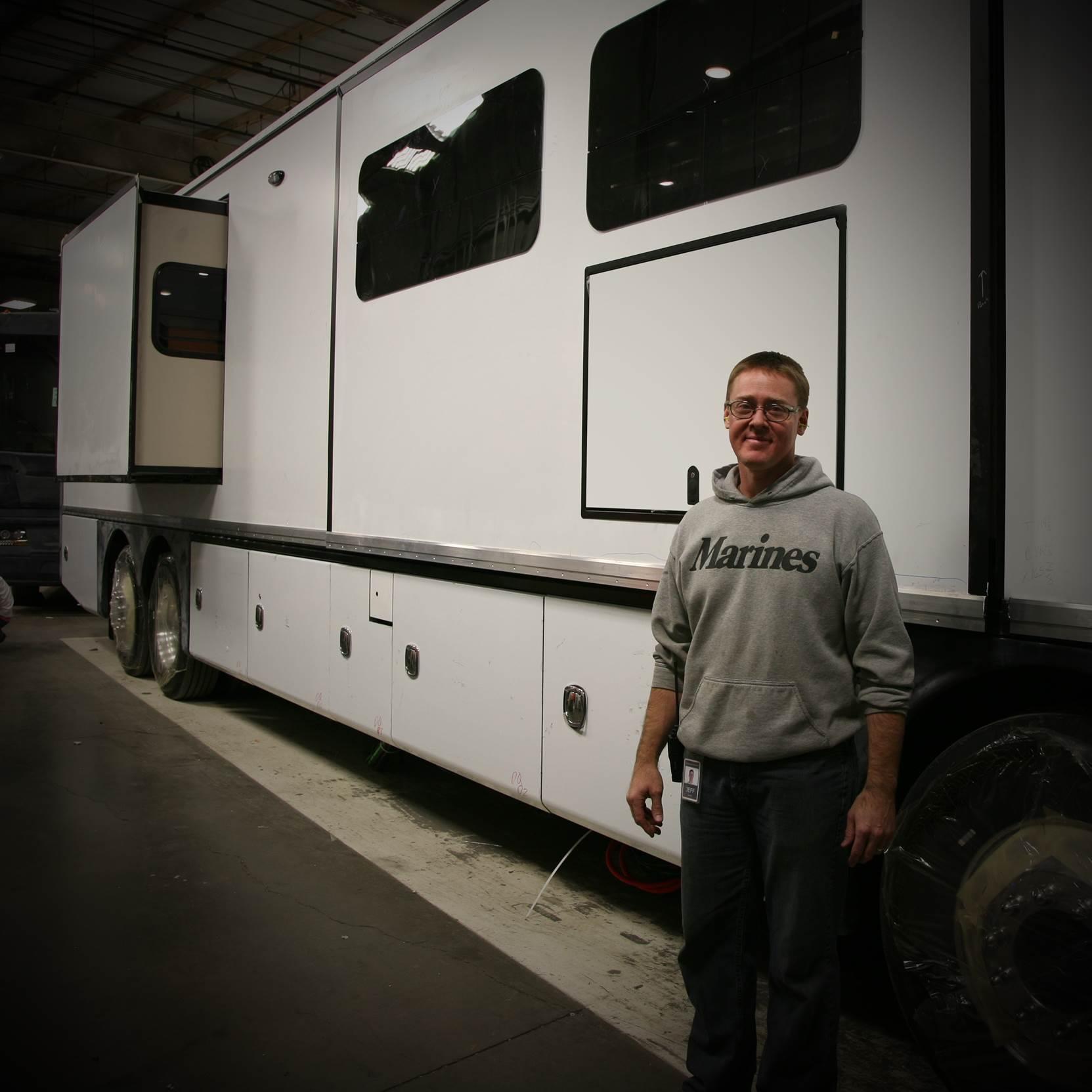 Motioning with his hand in the air, Jeffrey Shane takes a step back. Then another. The 45-foot motor coach follows his lead, slowly edging forward into the spot where Shane once stood — a sliver of space on Line 2 of the REV Recreation Group production line in Decatur, Ind. The air is filled with the sound of whining drills and whirring saws but Shane’s voice carries over the din.

Jeff, the Line 2 Group Leader, hurries away to give more instructions, sometimes into a two-way radio, sometimes with crewmembers surrounding him. And on some days, like today, he wears a gray shirt with the words “Marine” imprinted across his lean chest.

Jeff is among a long list of veterans who work on the REV RV line. There’s Michael Bennett, Sean Fulton and Nancy Turner. There’s Lee Eaton, Dennis Walls and Amanda Winters. … The list goes on. Like Jeff, many of these employees find a certain pride in putting their American-made stamp on these luxury motor coaches.

“Maybe it’s because I’m a vet, but I like being a part of something American made,” Jeff says. “It’s a good feeling.”

And a job filled with stability.

“This job has been one of the steady things in my life,” he says, reflecting on his 23 years at the company. “I can depend on this line …” As well as the others. Jeff has worked on almost every line at the plant, and now he leads one of the most detailed stops on the production line, where his team puts the finishing touches on the Class A diesels.

Jeff’s four years in the Marine Corps helped equip him to be the leader he is today.

“I think my time in the Marines gave me a solid work ethic and good leadership skills,” Jeff says, recounting his experience.

After high school, Jeff enlisted in the Marines. He completed boot camp then was sent to Okinawa, Japan, where he spent a year with a re-fueler squadron. As a corporal, he went on to other western Pacific posts. Eventually, he finished his service at the Marine Corps Recruit Depot in Paris Island, S.C., working in administration. During the latter years, Jeff had a backpack at the ready for Operation Desert Storm, but the Gulf War was swift. Jeff considered a long-term career with the Marines, but military freezes during the Clinton administration forced him to steer his life in a new direction.

Now, the 45-year-old says, those years in the Marines “feel like another life.” Still, he hasn’t forgotten what that four-year service taught him.

“Everything I learned from the military, I use now,” Jeff says. “I use that same discipline to help mold these young guys on the line.”